Calligraphy is one of the traditional arts unique to China. It is not only a stool of cultural communication but an artistic treasure with shining and extraordinary splendor.

Chinese calligraphy has a long history and lasts about 1000 years. It can be considered as a unique artistic form of the treasury of Chinese culture. It is the representative of Chinese art and is reputed as the most ancient artistic form in the history of oriental world. Calligraphy has exerted wide influence world widely and has even been introduced to many neighboring countries. Picasso, the world famous master of art, once expressed that “If I once lived in China, I must had become a calligrapher rather than a painter”. 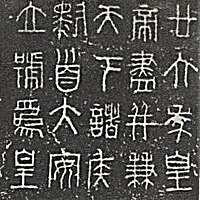 It was originated from East Han Dynasty. The rise of Official Script is another reform in Chinese Characters, ushering in a new stage of the development of Chinese Calligraphy. In fact it is a transition period on the history of Chinese Characters development, laying a solid foundation for Formal Script. Official Script features flat, neat, and refined structure. When East Han Dynasty began, left-failing stroke and right-failing stroke bent upwards, other strokes were characterized by variations and beauty of calligraphy. The style of Official Script features diversification and it has high value for appreciation.

It is also known as Zhengshu Script or Zhenshu Script, evolved form Seal Character. It is simpler in structure and square in shape. To be specific, it has more standardized horizontal and vertical. The integral feature of Formal Script is neatness and orderliness, for which it is widely used and favored today.

It is the cursive form of Formal Script. Originated from late Han Dynasty; it is less compact than Formal Script and less cursive than Cursive Hand.

It is written according to certain rules. It has concise structures with borrowed components. Although it looks irregular, Cursive Hand has high artistic value beyond its practical worthiness.
Credit to ：China Highlights
pic：wikipedia